If you're looking to invest in a new set of irons to get added distance, check out our run down of current favourites

It should come as no surprise that distance is a huge factor in the modern game of golf. If you can hit the ball further than you have a distinct advantage over everyone else at pretty much every level of the game. Bryson DeChambeau for example has an advantage at every event he tees it up.

One avenue manufacturers have realised that distance can be gained is in the irons sector, and as such they have made huge leaps forward in technology to help players hit the golf ball as far as possible.

Within this particular category of the best distance irons, you’ll find clubs featuring technologies to maximise clubhead and ball speed in order to generate maximum distance.

That being said, distance is obviously not the only factor to consider when choosing an iron because if there is no control over that distance, then what is the point?

As such we have looked at some models below that not only help maximise yardage, but also have a degree of control and feel too.

Watch our video on the Best Distance Irons below

TaylorMade’s longest iron in the current range, and one of the most forgiving, is the SIM2 Max OS.

The newly designed head, with a polymer cap instead of the Speed Bridge on the previous model, is large and really boosts confidence thanks to the sole width, offset and chunky topline. It just looks like a powerful iron down by the ball, not to mention one that seems impossible to hit badly.

The stability on offer is also noticeable – when you strike the heel or toe the face holds firm and the ball holds its line through the air. Only the poorest of strikes will result in a missed green which shows TaylorMade has managed to create an iron that blends distance with accuracy.

The JPX921 Hot Metal is the longest iron in the JPX range, thanks to the use of Chromoly 4140M and a re-engineered Cortech face, now 0.2mm thinner across the centre point, creating faster ball speeds.

These are assisted by a Seamless Cup Face featuring a variable thickness sole design that allows the leading edge to act as a hinge, generating more face flex. A new model to the Apex range, the DCB is the iron for those seeking distance but still want the look and feel of a forged design.

Despite the shape clearly being the one most revolved around distance, the look is still fairly traditional with a slightly thicker topline compared to the Apex, Apex Pro and Apex MB designs.

From a technology standpoint, distance comes from the deep cavity back design, and the 50 grams of tungsten in the longer irons to help players get the ball in the air. The enhanced sole width has been engineered for easy launch and solid turf interaction out of a variety of lies as well.

Importantly there are also urethane microspheres to improve the sound of the irons which can be an issue in the best distance irons.

Overall, the lure of the extra distance and forgiveness in the Apex DCB  in a package that still looks appealing and feels good will make these very popular. An upgrade to the popular Speedzone irons, the Radspeed has a number of subtle improvements to help players hit it further.

Cobra have kept the lofts on the Radspeed the same as the Speedzone, but during our testing we found the 7 iron went five yards further on average. This is very impressive considering the lofts have not changed and it is a credit to Cobra’s clever design in the Radspeed.

Speaking of clever design, the 3D printed medallion is the chief change from the previous model and it offers makes the irons feel very lively off the face, whilst also helping with forgiveness.

Cobra has also made the Radspeed irons a lot more pleasing to the eye with a smaller sole shape, funky cavity design, and there is also a carbon fibre effect on the topline too. This may not be for everyone but we liked it as we felt it tricked the eye into thinking the club is thinner that it actually is.

With Cobra Connect grips as standard – and a One Length option available – the Radspeed irons offer some of the best pound for pound performance and value in the iron market.

An iron that recently made our Editors Choice list for 2021, the Wilson D9 is one of the longest irons we’ve tested.

This is thanks largely to Power Hole technology. The Urethane-filled pocket arrangements increase deflection and allows more energy to transfer to the ball across the entire face for higher balls speeds and increased distance.

The irons also have a new ultra-thin face which incorporates a larger sweet spot for more forgiveness.

During testing we felt the feel also stood out massively – the D9 feels as hot as a three-wood or a driver out of the middle and feels nearly as good on slight mishits too.

Importantly, the irons offer up a clean, traditional look at address, and they inspire confidence too with the generous topline width and wide sole. 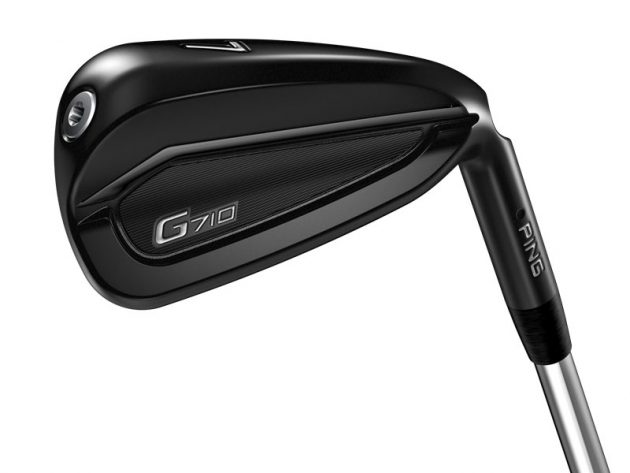 With its black PVD coating, the Ping G710 is a standout iron designed to help improving players get the most from their games.

With flexible maraging steel face, the design is intended to replicate the feel of a fairway metal and the speed and power produced by the G710 is impressive.

We found the G710 produced a satisfyingly high ball flight and some good distances, even on the off-centre strikes.

The addition of Arccos shot-tracking sensors embedded in the grips as standard bolsters the appeal.

This is a great option for an improving golfer looking to improve consistency and distance.

The ZX4 is Srixon’s iron built for distance, whereas the ZX5 and ZX7 models are for more control and feel.

In terms of how they provide more distance, MainFrame technology is a variable thickness pattern milled into the backside of each face, and it helps increase ball speed. More distance is the logical result of that.

The irons also help in terms of strike too with the Tour V.T. Sole which helps the iron move through turf rather than dig down into it.

Of course there is also a fully hollow construction too which helps players hit shots further regardless of where they hit it across the face.

This is said to offer maximum ball speed and distance and there is also an enlarged sweet spot across the face.

Built for the game-improver, it prioritises distance and forgiveness in equal measure and our testing showed that it delivers.

This iron does feel quite firm but is very solid and stable on mishits – ideal for inconsistent golfers who require assistance to find more greens in regulation. It has a flawless look at address, and it is definitely an appealing prospect for the mid-handicap golfer that should not be discounted.

+ Long performance on offer
+ Subtle, good-looking irons
– Wide sole may put some off The Honma T//World GS irons are all about gaining speed across the face to create more distance with less effort.

The irons feature an L-Cup structured face which helps enlarge the sweet spot whilst a deep cavity and wide soles help inspire greater confidence at address.

Overall we think there are clear performance gains to be had here and we are also fans of the look of these irons because they are not hugely chunky, and the red and black accents in the cavity look good in the bag too. 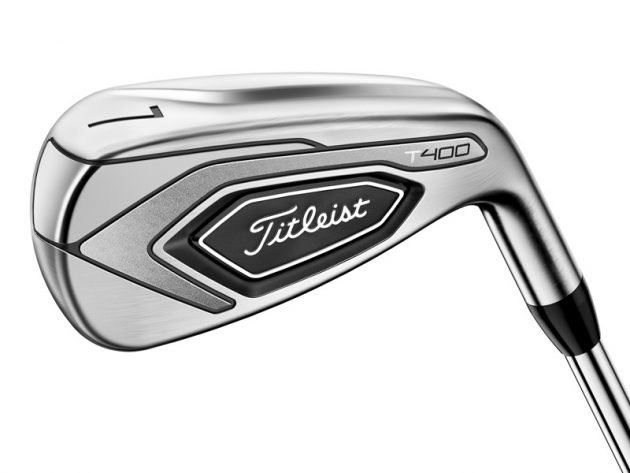 The Titleist T400 iron has been designed to be the most forgiving and longest iron in Titleist’s popular T series.

It has the strongest lofts in the Titleist range, but the launch is not compromised with a strong, high ball flight produced.

The set is progressive with blade lengths, sole widths and hosel lengths decreasing towards the shorter irons.

Overall, we think the T400 is a great distance iron that could really help higher handicappers get the most from their games. 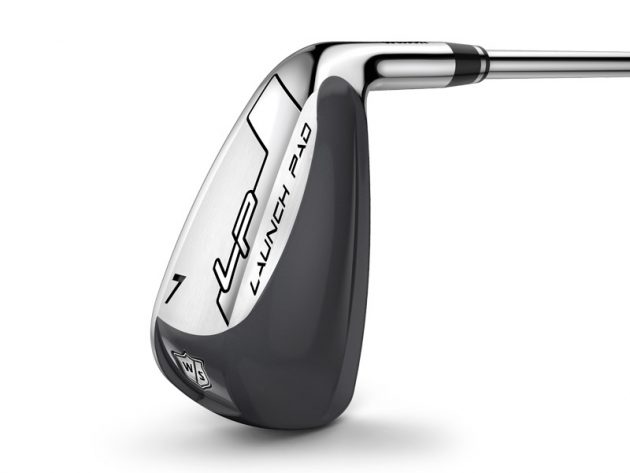 The clubhead of the Launch Pad irons incorporates a wide, progressive sole throughout the set that prevents the sole from digging into the turf before impact. The short irons (7-SW) feature more traditional sole widths, while the longer irons (4-6) feature wider, more forgiving soles, for more consistent ball-striking and greater distance.

In testing we were impressed with the Wilson Staff Launch Pad irons. They’re not going to hit the ball for you and they’re certainly not going to save a really poor swing, especially in wet conditions, but the margin for error on the strike is definitely larger on a club like this and if you’re a beginner or high handicapper it’s certainly an option worth trying.

It is also one of the best golf irons for seniors too because of the consistency it offers.

+ Forgiving
+ Good distance
– Not as workable as Pro model 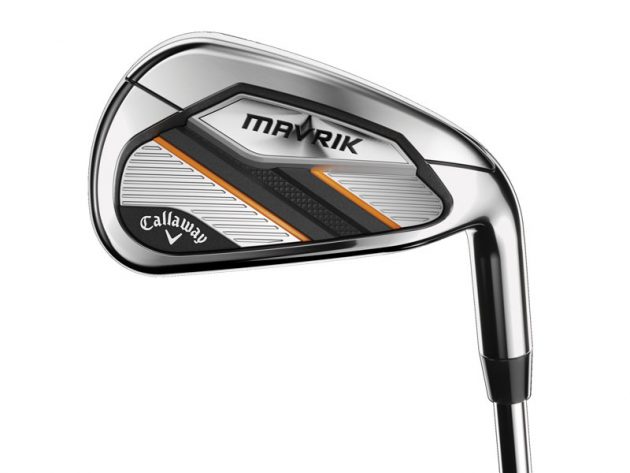 There’s some complex technology contained within the Callaway Mavrik Iron.

The irons feature Flash Faces designed by a super-computer. The result is a sophisticated face architecture for every loft delivering a significant boost in ball speed and optimised spin.

In the long irons, the faces are designed for launch and speed, while in the mid-irons the faces are engineered for a combination of speed and spin consistency. The short irons have a face construction designed to optimise precision for shot-making.

Tungsten weights have been precisely positioned to deliver the best possible launch and trajectory.

In testing, we found the standard Mavrik Iron to be the longest of the three in the range – the others being Mavrik Max and Mavrik Pro. If you’re looking to gain maximum distance from iron shots, this super-forgiving set could be the way to go.

To take a more in-depth look at the Mavrik iron range, take a look at our best Callaway irons guide as well.

Meanwhile, the 8-iron through to pitching wedge feature a cavity back construction, which focuses on precision and control rather than maximising distance.

The Cleveland Launcher UHX irons will suit a player who struggles to find consistency with the longer irons but still craves a degree of control and precision in the shorter clubs.

We hope you found this guide on the best distance irons informative.