We take a look at some of the most famous golf holes from around the world.

The Most Famous Golf Holes In The World

Bearing this in mind there are obviously lots of different golf holes around the world that deserve recognition as the most famous, which is exactly what we have tried to do in the list below.

Perhaps the most famous hole in all of golf, the 17th at St Andrews is called the Road hole and is also one of the hardest golf holes on the Open calendar.

The tee shot is like no other as you hit over the hotel and if you have been skilled enough to find the fairway you then have to navigate the road, and one of the most intimidating bunkers in the world. The 18th is also famous thanks to its history and the Swilken Bridge that has been the site of many great pictures.

One of the most iconic golfing venues in world golf, playing Pebble Beach is on the ‘bucket list’ of most enthusiasts of the game.

With holes running along Stillwater Cove and then out onto a peninsula jutting into the Pacific, there are some incredible shots to be hit on the way round.

The short par-3 7th is one of the most famous – 100 yards from an elevated tee straight out towards the ocean. There are few holes that have been photographed more.

The 6th, 8th and 18th all deserve mention too here.

Augusta National regularly tops lists of the most famous courses in the world and the most famous holes on the course have to be 11, 12 and 13, collectively known as Amen Corner.

All three holes have the ability to ruin a players chances at a Green Jacket but if played well, a player can leap up the leaderboard.

Of course TPC Sawgrass is Pete Dye’s most famous creation as it hosts The Players Championship every year, but its most iconic hole, the island green par-3 17th was actually the handiwork of his wife Alice.

The stretch from the 13th to the 15th at North Berwick contains the course’s most famous holes – The Pit, Perfection and Redan.

The 13th is famous as it is stoutly defended by an eminently adjacent wall that takes the links chip and run firmly off the table.

Also the Redan deserves a mention too as it is one of the world’s most copied par 3s around the world.

The 18th at Wentworth has seen many amazing moments in various guises as it, along with the entire course, has been renovated and changed several times.

It hosts the BMW PGA Championship every year on the European Tour which regularly attracts many of the world’s best players.

Martin Ebert may have made changes to the course fairly recently but golfers everywhere will be delighted that the 8th hole – the world-renowned Postage Stamp – has remained the shortest on the Open rota. But as many will testify, it’s most definitely not the easiest.

Regularly voted one of the best courses in the world, Cypress Point on the Monterrey Peninsula features many incredible holes, chief among which is the par-3 16th. Yes you read that right, it is a par-3.

These two holes are famous because of the presence of the incredible Church Pews bunker as you can see above.

The two most famous holes at Lahinch are classic Old Tom Morris. The par-5 4th – The Klondyke – at first snakes through the dunes before serving up a blind second shot over them, while the 5th – Dell – takes ‘blind’ to another level, a short par 3 to a long shallow green sandwiched between 30ft dunes front and back.

The 16th hole at TPC Scottsdale has become incredibly famous because of its amphitheatre surroundings which gets thousands of fans during the Waste Management Phoenix Open.

The golfing world was wowed by the 16th hole at Royal Portrush at the 2019 Open Championship.

It had previously been the 14th hole before MacKenzie and Ebert made changes to the course, and the hole known as Calamity Corner shot to prominence because of the huge, cavernous hole short and right of the green.

One of the standout holes on the outstanding Royal County Down is the par-4 9th and it has to be one of the most photographed holes in the world.

The closing few holes at the 2018 Ryder Cup course are iconic thanks to the watery design with the 18th being the best of the bunch.

The par-72 Royal course at Vale do Lobo features one of the most photographed holes in the world, the cliff-top par-3 16th.

A legend of a golf course that nobody really seems to know all that much about, Pine Valley regularly tops lists of the best golf courses in the world.

Perhaps the most famous has an iconic name, the Devils A-hole which is named as such because of the small, incredibly deep bunker short of the green as you can see above.

A course that hosts the RBC Heritage every year on the PGA Tour, Harbour Town is one of Dye’s most recognisable designs, especially the 18th hole with its famous lighthouse.

The 18th hole was the site of Ben Hogan’s legendary 1-iron approach shot that set up his victory at the 1950 US Open, which came just 16 months after his near fatal car crash.

Designed by Dave Thomas and Peter Alliss, The Brabazon is known as one of Britain’s premier tournament courses and has a long history in the Ryder Cup too.

The 18th deserves a mention but the most famous hole on the course is the drivable par-4 10th where the bold might attempt to drive over the ditch to the narrow green in the style of Seve Ballesteros.

Famous for being one of the most difficult finishing holes in golf, the 18th at Carnoustie is perhaps best known for the mis-haps of Jean Van De Velde at the 1999 Open Championship.

As expected the 14th hole at Coeur d’Alene gets the most attention at this Idaho golf course because, well, you can see why above. 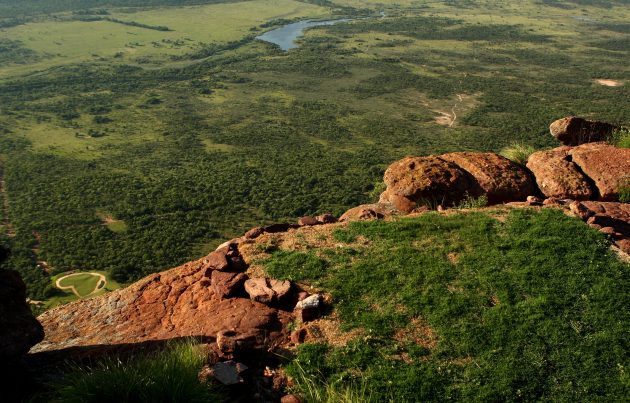 The Legend Golf and Safari Resort has had holes designed by lots of professional golfers like Justin Rose, Colin Montgomerie, Vijay Singh, Sergio Garcia and Padraig Harrington. However the extreme 19th is where the course is unlike any other.

The tee sits on top of Hangklip Mountain and requires a helicopter ride to it before you hit down to a green shaped like the continent of Africa. It sits 1,300 feet below and measures 395 yards.