We take a look at some of the most extreme golf courses situated around the world.

Golf has extended itself across the globe to seemingly every nook and every pocket of land available.

As a result there are some truly incredible and dramatic golf courses along with some amazing golf holes which should only be described as extreme.

In this piece we have taken a look at some of the most extreme golf courses in the world, How many have you played?

Also if there are any golf courses you can think of which should be described as extreme, then do not hesitate to let us know via our social media channels on Facebook, Twitter or Instagram.

Cape Kidnappers is probably Tom Doak’s most famous course because of images like the one above. Completed in 2004, the back-nine in particular is outrageous as the holes are situated on top of fingers of land.

Thracian Cliffs runs alongside cliffs in Bulgaria and all its holes have a view of the Black Sea. The course is laid out on a series of shelves between cliff sides.

Par-3s like the one above show just how visually stunning and extreme the golf is at Pete Dye’s Case de Campo, Teeth of the Dog course in the Dominican Republic.

Wolf Creek is one of the most spectacular golf courses in the United States. With lush green fairways rolling through desert canyons, tee boxes perched on rocky ridges offering views across the course to the sprawling desert beyond, and fabulous sloping greens surrounded by rocky outcrops, this is jaw dropping golfing terrain.

As expected the 14th hole at Coeur d’Alene gets the most attention at this Idaho golf course because of, well, you can see why above.

Old Head, set on a promontory on the south cost of Ireland, really is the closest GB&I gets to Pebble Beach, and many will argue that it is in fact more spectacular than its American counterpart.

Situated on Socorro Peak or M-Mountain in Socorro, New Mexico, this is a one-hole-one day tournament. The Elfego Baca Shootout starts at the top of Socorro Peak at 2,208 metres (7,243 feet) and drops 777 vertical metres (2,550 feet). Each golfer has 10 balls and must finish with one or they are disqualified.

Golfers are allowed to use a small piece of carpet as a tee on every shot and balls must be be found within 20 minutes.

It might be one of the poorest countries in the world, but Bolivia boasts more than a few decent courses and in La Paz GC has the world’s highest. At 10,650 feet, it’s around two miles above sea level, which can add up to 50 yards to your driving distance.

For the intrepid golfer the only real option is to press on to the southern tip of Tierra del Fuego where the shabby but endearing nine-holer at Ushuaia – the most southerly course on the planet – lies in wait. It’s a long way down so unless icebergs and penguins are your idea of perfect playing partners, don’t try it in winter.

Gary Player Country Club sits next door but Lost City is a world-class venue in its own right. The most extreme thing about is is the crocodile put that guards the downhill 13th hole.

The Legend Golf and Safari Resort has had holes designed by lots of professional golfers like Justin Rose, Colin Montgomerie, Vijay Singh, Sergio Garcia and Padraig Harrington. However the extreme 19th is where the course is unlike any other.

The tee sits on top of Hangklip Mountain and requires a helicopter ride to it before you hit down to a green shaped like the continent of Africa. It sits 1,300 feet below and measures 395 yards.

The only golf course that exists in Afghanistan is the nine-hole Kabul Golf Club which will provide an unforgettable adventure.

Himalayan was designed by Major Ram Garung in the 1990’s and was created almost entirely by hand. Renowned architect Tom Doak, cites this as a golf course that you have to see sometime in your life. 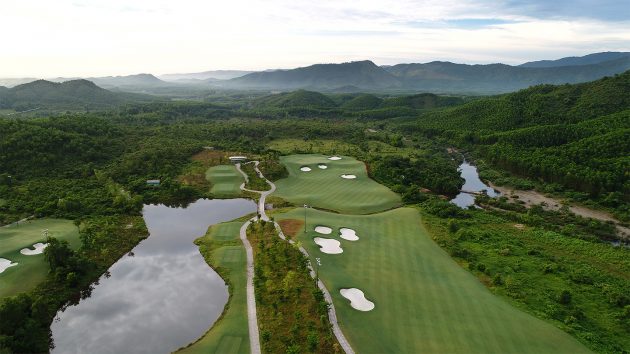 This remarkable course works its way through an undulating and peaceful jungle-scape. Designed by Luke Donald in 2016, it has already won multiple awards including best new course in the world, and it is packed with drama and fun.

The golf snood is a vital piece of…

Browse our selection of the best golf jumpers