The Best Golf Courses In Florida

In terms of quality golf, Florida is one of the states definitely worth visiting in the United States.

Given the concentration of professional golfers that choose to live in the state, and the regular presence of the PGA Tour and big tournaments down there, it makes sense that there are some truly outstanding courses located there.

Below we have taken a look at some of the best.

Widely regarded as the best course in the state, largely thanks to the genius of Donald Ross‘ routing, many believe Seminole to be his finest work. Ben Hogan used to play here regularly to practice for The Masters and when you consider the greens are the courses main defence, it comes as no surprise how successful Hogan was at Augusta.

The host course of the second match between Tiger Woods and Phil Mickelson, Medalist Golf Club first opened in 1995 and was a design collaboration between Greg Norman and Pete Dye.

It is used to matchplay encounters as it first burst onto the golfing scene in Shell’s Wonderful World of Golf in which Norman took on Nick Price (watch above).

Lots of PGA Tour players call it home including Tiger and the course even has ‘Tiger’ tees which are said to make the course one of the toughest in the state too.

The 17th hole on the Red course (Kevin Murray)

Built on an old phosphorous mine the three courses at Streamsong are all stunning and unique experiences. The Red was created by the team of Bill Coore and Ben Crenshaw and is slightly tighter than its Blue sibling.

The Blue was created around the same time as the Red with Tom Doak‘s Renaissance Golf Design team responsible for its creation. The Blue runs at the centre of the property and as a result it is wider than the Red.

The Black course at Streamsong came a few years after the other two, this time Jim Wagner and Gil Hanse were tasked with its creation. The Black sits away from the other two courses to the South and is much larger in scale, especially in terms of the huge putting surfaces.

All three layouts have helped Streamsong build a reputation as one of the best resorts in America. 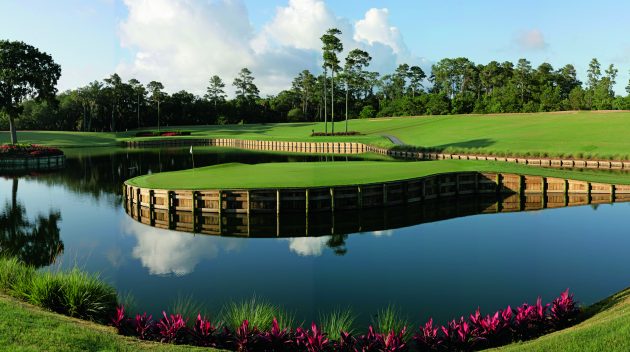 Of course this is Pete Dye’s most famous creation as it hosts The Players Championship every year, but its most iconic hole, the island green par-3 17th was actually the handiwork of his wife Alice.

Bay Hill hits our screens every year with the hosting of the Arnold Palmer Invitational and it usually delivers an exciting event. Dick Wilson designed the 18 hole layout which opened for play in 1961 and 15 years later Arnold Palmer purchased the club.

Tom Fazio designed the Quarry course at Black Diamond Ranch and it is spectacular to say the least.

Perhaps best known for its nickname, The Blue Monster, Doral was designed by Bay Hill creator Dick Wilson. A number of architects and designers have left their mark on the place over the years and it remains one of the most respected golf courses on the circuit thanks to its length, bunkering and overall difficult.