The region has some of the most stunning courses in the world. Here are some of the best.

The Best Golf Courses In The Caribbean

The Caribbean consists of hundreds of islands, big and small that have reefs, coves, stunning blue water and amazing views out to sea.

Because of this, the region has some incredible golf courses and here we have taken a look at some of the best. Strictly speaking Bermuda is not a Caribbean country but given its proximity to other countries in this list, we have included some of its brilliant courses.

The number one layout at the wonderful Casa de Campo resort on the south coast of the Dominican Republic is a Pete Dye design called ‘Teeth of the Dog’. Carved by sledgehammer and pickaxe through the rocky coastline, it’s an 18-hole masterpiece, with seven stunning holes that hug the coastline.

With the azure waters of the Caribbean Sea lapping the edge of the layout on one side and palatial villas overlooking the other, this is a luxurious place to play golf and knocking shots around a course of such exceptional quality is really rather special – true millionaire’s golf.

Mid Ocean is a delight and is regualrly in the conversation for the best in the Caribbean. From the first hole where a decent drive invites a startling approach to a green that seems to be hanging in the ocean to the 18th where a slight dog-leg right takes you past the clubhouse and a verandah filled with the sort of people who like to laugh at your misfortune, Mid-Ocean is top class.

Tom Fazio’s Punta Cana (Corales) course opened in 2010 and it has everything. With some of the low yellow flowering bushes and overcast skies, you rally could be playing a links course in Scotland when you play along the Caribbean se holes – well, apart from the manicuring of the course, and the warm breeze instead of the biting cold of the North Sea. It’s a must-play course, and there really isn’t a weak hole on the track.

The ‘Big Easy’ has added a touch of magic to this links-style layout that blends in effortlessly with the natural surroundings. His signature is evident with five par 5s and five par 3s. The windswept dunes, some of which reach 30 feet in height, are a dramatic feature, similar to those at Royal Birkdale and Els Club Dubai.

The world-famous Royal Westmoreland resort on the west coast of Barbados is home to a Robert Trent Jones Jr course of the same name. The par-3s in particular are noteworthy with Ian Woosnam saying it has the strongest cast of one-shotters he’s ever played.

Many people eulogise how good this Jack Nicklaus layout is and when you peek at the vistas and the land the course traverses, it is easy to see why. Stepping onto the elevated 1st tee – which looks down on a perfectly manicured fairway with a slight dogleg to the left with the crystal clear waters of the Caribbean as a back drop – you would struggle to hit a bad shot if you tried.

The Golden Bear’s first venture in the Bahamas, Royal Blue doesn’t disappoint. The front nine features dramatic views of rolling white sand dunes, undulating fairways and the Atlantic Ocean, before a significant change on the back nine sees golfers face dense jungle and steep downhill terrain. You’ll have been wowed long before arriving at the island green on the 16th, which borders Lake Cunningham. 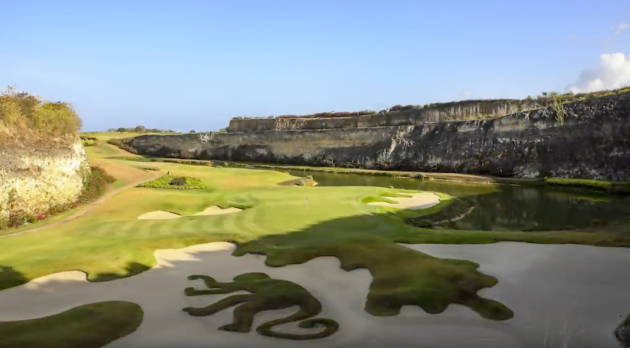 Lots of interesting photographs and visuals can be found at Green Monkey in Barbados like the one above with the famous Green Monkey in a huge bunker. Tom Fazio designed this course and you would not know it has been built in a quarry.

Designed by Tom Weiskopf, the course offers a stern challenge, not least because of its crosswinds. They can prove a distraction, as can the wonderful views of the Atlantic and the Nassau Harbour, where one or two luxurious yachts are bound to catch the eye. 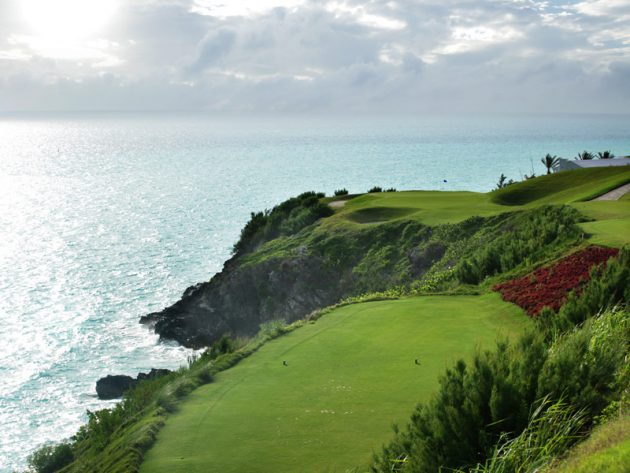 Port Royal is a stunning golf course situated on the island of Bermuda. A very undulating course that hosts the PGA Tour’s Bermuda Championship tournament, the par-3 16th hole in particular is a hole that stands out in terms of visuals and when playing

Abaco Club is regarded by many as the finest in The Bahamas. The links-style layout, designed by Donald Steel and Tom Mackenzie, enjoys a tranquil seaside setting, but unlike a number of other courses on the island, there’s a ruggedness here more akin to what British golfers experience at home, even if it is of a tropical kind.

Every hole is dramatic and your favourite is likely to change all the way, until another spectacular offering at the last – a par 5 that might just be the best closing hole in the Caribbean.

These terrifically different holes are situated up in the hills overlooking the deep gorge through which the Chavon River has carved its way. The first 18 were designed in 2002, over 30 years after Teeth of the Dog, with the Lakes nine added in 2011. The original two loops are now known as Chavon and Marina, and they are packed with interesting, undulating, exciting golf.

Curaçao is part of the Dutch Antilles and home to Old Quarry Golf Course on the Santa Barbara Plantation. Architect Pete Dye is famed for his distinct and stylish courses, and this scores very highly on both fronts. It is also a real toughie, especially if the wind is blowing, which is the norm here.

The course opened in 2010 and starts with two holes that hug the ocean. If the wind is from the north, then difficult is an understatement.

Designed by Greg Norman, Emerald Bay is stunning layout that winds its way through seaside dunes along a beautiful peninsula. The holes that hug the coastline are truly breathtaking, but such dramatic scenery comes at a price for golfers. When the wind blows, good scoring on this long course becomes more than a little difficult.