Famous for their work on Royal Portrush, we take a look at what other courses Mackenzie and Ebert have been involved with.

What Courses Has Mackenzie & Ebert Designed?

After being lead designers at Donald Steel & Co. for 15 years, Tom Mackenzie and Martin Ebert eventually started their own company in 2005 and have quickly built up an excellent portfolio of designs and restorations. Below we have taken a look at some of their best work as a team or by themselves. 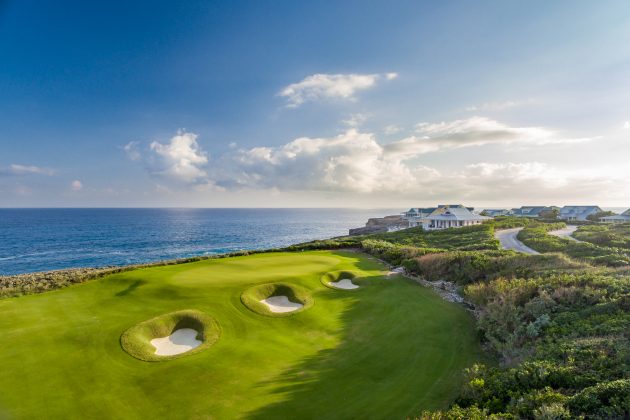 Abaco Club is regarded by many as the finest in The Bahamas. The links-style layout, designed by Donald Steel and Tom Mackenzie, enjoys a tranquil seaside setting, but unlike a number of other courses on the island, there’s a ruggedness here more akin to what British golfers experience at home, even if it is of a tropical kind.

Every hole is dramatic and your favourite is likely to change all the way, until another spectacular offering at the last – a par 5 that might just be the best closing hole in the Caribbean.

C.H. Alison laid out the original design and Mackenzie and Ebert were brought in to restore a golf course that has meant a huge deal to Japanese golf. It is arguably the finest course in all of Asia largely thanks to the design records Alison laid out being preserved by the club.

Founded in 1922, Liphook was laid out by a schoolteacher called Arthur Croome and has since gone under a major renovation project headed by Mackenzie and Ebert. It is short by modern standards but it is occasionally narrow and keeping the ball in play is of paramount importance. Also, make sure you stay out of the bunkers.

Back in 2018 new forward tees were added along with new complexes created for the 1st, 7th and 14th holes. Reshaping and bunker adjustments were also made to 12 holes from the original Archie Simpson and Old Tom Morris’ design.

Charles Hutchings and Percy Lucas laid out the 18-hole course in 1904 and it had been largely unchanged until Guy Campbell redesigned some of it in the late 1940’s. It re-opened for play in 1952 and then Ebert started developing the course back in the summer of 2017.

Mackenzie and Ebert’s most famous work, the pair were brought in to make some changes to the course in preparation for The Open. In fact their input was vital getting the decision over the line as they agreed to create two new holes deep in the dunes.

This would allow the former 17th and 18th holes that were on flat land close to the clubhouse to be used for the ever-increasing tented village that now accompanies The Open Championship.

The new holes – the 7th and 8th – are absolutely stunning creations that fit seamlessly into the routing, and the entire course delivered a brilliant Open Championship won by Shane Lowry.

In 1935 the members at Saunton decided they required a second course (the East came first), so Herbert Fowler was asked to submit a design. The new course was built, but when the Second World War started in 1939 it was occupied by the military and used for training. The West course was re-designed by Frank Pennink, but it didn’t re-open until 1973. Tom Mackenzie completed a restoration in 2016 as well. In all this is an undulating links with many of the holes set between the dunes. Cross-ditches, grassy mounds and hollows, clever bunkering and raised greens combine to produce an excellent challenge.

Arnold Palmer’s first European course design, Tralee blends a more understated front nine with a back nine of unrelenting magnificence. The fearsome par-4 12th and spectacular par-3 13th across a deep chasm rank among the highlights.

The pair were brought in to make changes at Trevose in 2016. Holes like the 4th, 14th, 15th and 16th were reworked, including bunker renovations and changes to green complexes.

When you already have one of the finest and most attractive courses in the UK&I, one that has staged four successful and dramatic Open Championships, it is a bold move indeed to undertake substantial changes in a quest to make it even better. Ebert took on this task and completed it excellently as shown by his work on the 9th hole.

The former par 4 has morphed into a world-class ultra-long par 3 played over the cliffs to a new green in front of the lighthouse. This is followed by what is now a glorious snaking par 5 that follows the coastline and another beautiful and thrilling short hole at eleven.

Ebert also played a key role on this course as he reworked the Arran course to form the 18-hole Kintyre layout which was then renamed after Donald Trump bought the property in 2014. The course is named after the boy who grew up in Turnberry castle.