That’s Bubba Watson’s catchphrase, and he
certainly likes to josh around and play the fool like someone who doesn’t take life too seriously, albeit while hitting some pretty
impressive and entertaining shots.

The phrase ‘you’re welcome’ is usually preceded by someone thanking you for a kind gesture. Well, this week I am certainly not offering any gratitude in the direction of Mr Watson.

His caddie probably isn’t too impressed either, after Bubba’s collapse on the par-three 16th saw him turn a two-shot lead at the head of the scoreboard into a one-shot deficit, ultimately relinquishing the title, he took his dissatisfaction out on his assistant.

This blog http://ftw.usatoday.com/2013/06/bubba-watson-blew-up-on-his-caddie-in-the-nicest-way-possible/ makes the salient point that Bubba was just doing at the Travelers Championship what most amateurs do on courses around the world every day – blame someone else for their mistakes – well, in that case, I am blaming the 2012 Masters Champion for my losses last weekend. Me and Bubba (or rather, Bubba and I) have previous, as his play-off win against Louis Oosthuizen cost me Augusta profit in 2012.

Having sided with the South African for the coveted Green Jacket, it was agonising to see that big hook land where it did, denying me a four-figure payout.

This weekend brought all those miserable memories flooding forlornly back into my bitter, sorrowful soul.

To compound the discontent, I layed my entire book against Ken Duke winning, meaning that any of Chris Stroud, Graham DeLaet, heck – even Bubba Watson himself, emerged victorious, I wouldn’t lose anything.

Duke had never been crowned victorious in his journeyman career, hit 999/1 on Betfair at one point as the chart below painfully portrays, and so I thought the £215 lay at 1.41 was a reasonable course of action. He went on to win, I went to bed a loser for the second week running. For this week’s AT&T National and Irish Open I’m going hard (well, £15.12 each way) on a Seung-Yul Noh/Graeme McDowell double.

Noh was fourth in the US event last year and is available at a juicy 150/1 today, while G Mac, despite missing the cut at the US Open and at this course twice, where is has also never managed to record a score under-par, appeals at 18/1 (for some reason) with SportingBet offering six place each way terms. 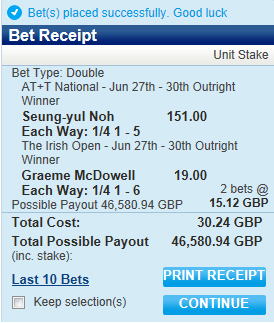 Dave has blogged for the past few years at Palphabet.blogspot.com on the many ups and downs associated with betting on a mulititude of sports.