I felt like a punting Pac-Man last week. Fiercely competing bookmakers were presenting feverishly fruity treats in front of my face and I couldn’t help but feast with fervour on such flavoursome fancies.

Those pesky Pac-Man gambling ghosts were flashing an edible, inoffensive blue, and I was gorging on what seemed a golden opportunity for money-making. 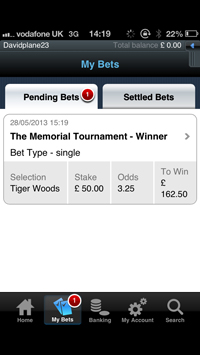 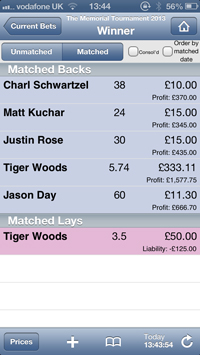 I made Tiger’s victory a foregone conclusion, and the statistics increased my confidence: defending champion on the prowl for his fifth win in eight outings this season, five-time victor at Muirfield Village in 13 appearances – he should have been odds on!

To bolster this certainty, I doubled Woods up with Mikko Ilonen for the European Tour’s Nordea Masters.

Ilonen finished tied second in the Hasan II, outright runner-up in the Volvo China and was third at this Swedish track last term.

The double paid out at a delectable 107/1 and I had £25 each way, fully expecting Tiger to win and Mikko to run well. (Ilonen was tipped by GM as well) So it is with mixed feelings that I write this piece, on an aeroplane, cruising over mainland Europe on the way to Istanbul for a work conference and hopefully not too much tear gas.

Tiger bombed out, finishing tied-65th and carding a third round back nine 44 – the worst of his glittering PGA tour career.

Ilonen, conversely, triumphed at the Bro Hoff Slott Golf Club, climbing up from 114th in the world to enter the top 70. Mikko ended a 126-tournament, six-year winning drought, and now sits fifth in the Race to Dubai.

In the Memorial, I covered the large Tiger bet with a Rod Laver on Matt Kuchar. Tournament form of 13-10-5-8-2, coupled with the fact he was selected by Racing Post’s Steve Palmer and William Hill podcast’s Mike Grenham made him impossible to ignore.

It wasn’t exactly how I expected the profitable win to pan out, but it was profitable all the same. 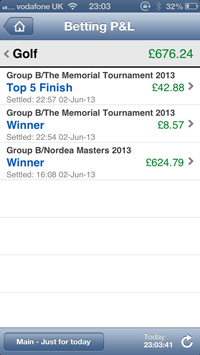 Finally, I enjoyed Matteo Manassero’s Nordeo top 5, having backed him at big prices for the US Open and The Open, but right now, looking down at Austria, all I can think for this weekend is: Bernd Wiesberger – third in Sweden and back in his motherland to defend his Lyoness Open title.

Dave has blogged for the past few years at Palphabet.blogspot.com on the many ups and downs associated with betting on a mulititude of sports.